President Ibrahim Mohamed Solih has stated that his foremost national duty today is to protect the interests of the nation. He made this statement addressing the nation at the official reception held this evening to mark the National Day of Maldives.

The President elaborated on the elements of Maldivian nationalism, stating that defending independence, maintaining safety and security while reinforcing Islamic values, protecting human rights, and supporting democratic ideals are all nationalistic characteristics.

The President said that National Day is the day which best propagates and instils individualism and unity amongst all Maldivians. The President underlined the need of upholding the nationalistic principles ingrained in our hearts by our forebears, and urged all Maldivians to safeguard these virtues.

Furthermore, the President remarked that long-serving state employees and those who have dedicated their lives to public service have not been appreciated on a national level. He then announced that the government has decided to honour long serving public employees on a national level annually on Republic Day starting this year.

First Lady Fazna Ahmed, President of the 76th Session of the United Nations General Assembly (PGA) H.E Abdulla Shahid, senior government officials, members of the parliament and senior officials from state institutions had gathered to witness the ceremony held to mark the occasion. 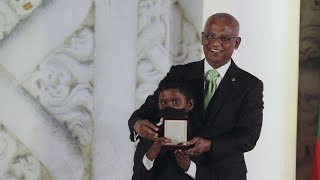