Ambassador of Tunisia presents credentials to the President At the meeting, President Solih and the ambassador discussed a wide range of topics, including strengthening bilateral relations, the Covid-19 situation, development cooperation, and bolstering international cooperation. President Solih described Tunisia as a seaside nation bound by Islamic solidarity, similar to the Maldives, and spoke about the many shared common interests between the two.

President Solih expressed the Maldives' commitment to working with Tunisia on these common goals, and expressed hope that the two countries' long-standing relationship would be strengthened. On the topic of increasing cooperation in the fields of trade and investment, the President expressed his interest in exploring potential avenues of cooperation and the exchange of expertise in the fields of fisheries, agriculture, and tourism development.

On the international front, President Solih spoke about enhanced collaboration at the United Nations (UN), Organisation of Islamic Cooperation (OIC), and the Non-Aligned Movement (NAM) and in the areas of human rights, counter-terrorism, peace, and security. On that note, the ambassador congratulated the Maldives on its increased role and participation in international fora, particularly the UN. She further assured President Solih of Tunisia’s continued support in this area.

President Solih and the ambassador concluded their meeting with the hope of elevating Maldives-Tunisia relations. The Maldives and Tunisia established diplomatic relations on September 10, 1983. 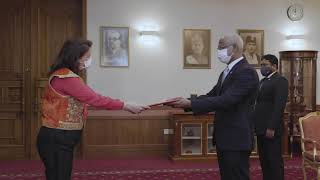